Get Social with Us.

I studied Cake Decoration and Flour Confectionary at Newcastle upon Tyne College of Arts and Technology, where I received a City & Guilds qualification in that medium in 1982. In 1989, I became an Accredited Demonstrator for the British Sugarcraft Guild. In 1994 I was approached to write a book on advanced piping techniques focusing on extension work, which was later published worldwide in 1996. Over the years I have had various articles published - Cake Craft and Decoration, British Sugarcraft Guild, International Cake Exploration Societe and Squires magazines which were made available worldwide. I have taught various classes as well as given demonstrations in the UK, USA, Australia and Italy.  One of my UK claims to fame is the fact I designed and create a wedding cake which was featured in a Coronation Street trailer (picture below) for the ‘Wedding That Never Happened’ between Becky and Steve. In 2012 I was one of the judges of the Professional class Wedding Cakes at the Oklahoma State Sugar Art Show, Tulsa, which is the second largest cake show in the world, this show however offers the largest prizes in the world.

During this time, I have designed and created various corporate cakes including those for Barclays, Citroen and Innospec, whilst also creating those for the general public. I regularly conduct sugarcraft classes as well as Royal Icing workshops in my own studio in the North West, alongside teaching at various other venues worldwide. My new book ‘Piping on Cakes’ will be launched at the Oklahoma State sugar Art Show in October and at Cake International (NEC) in the UK in November 2012 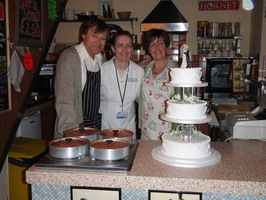